Towards the Inner Vision of the Truth

"And as a summoner unto Allah by His permission, and as a lamp that giveth light." — Holy Qur'an 33:46 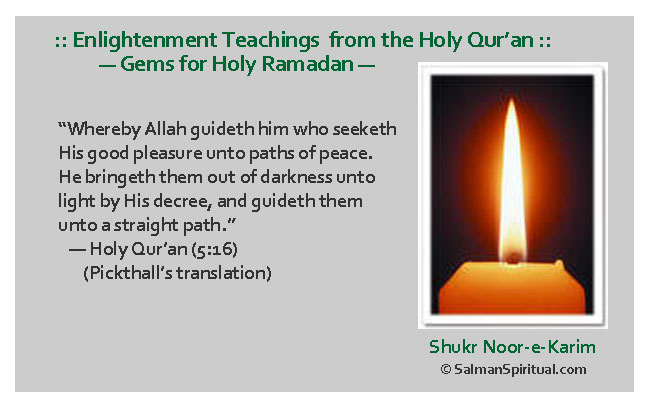 Part 2: An excerpt from 'A Code of Conduct—A Treatise of the Etiquette of the Fatimid Ismaili Mission'
In 'al-Risāla al-mūjaza al-kāfiya fī of Ahmad b.Ibrāhīm al-Naysbūrī has written the following gem:

"[§6] God summons to the creatures has three conditions: one that it be in the tongue of the prophets, the legatees, the imams and the dâ'îs, on all of them be peace; the second that it concern what He created in the world and in their souls as signs and evidence that calls them to the absolute Oneness of God and to paradise (paradise is safe from extinction and the faults of this world, and from tyranny, injustice and alteration); and third that it should be in accord with inspiration, grace and guidance."

(Source: Klemm, V. and Walker, P. E., A Code of Conduct—A Treatise of the Etiquette of the Fatimid Ismaili Mission, p.37)

Part 3: Dhikr Tasbi
The significance of the four phrases of the Holy Prophet's tasbi are explained in the following hadith:

Ibn Mas'ud reported God's messenger as saying he met Abraham on the night he was taken up to heaven, and he said, "Convey my greeting to your people, Muhammad, and tell them that paradise has good soil and sweet water, that it consists of level, treeless plains, and that its plants are 'Glory be to God' (Subhan Allah); 'Praise be to God' (Al-Hamdu Lillah); 'There is no god but God' (La ilaha illa-llah); and 'God is most great' (Allahu Akbar)'." Tirmidhi transmitted it, saying that is a hasan tradition whose isnad is gharib.

Let us now recite this prayer with humility, courage and conviction:

Allahu Akbar, Subhan Allah, Al-hamdu Lillah, La ilaha illa-llah
Allah is the Greatest, Glory be to Allah, Praise be to Allah, There is no god but Allah

Part 4: Angelic Salwat
Let us now start presenting a nazrana of angelic salwats to our beloved NOOR Mowlana Shah Karim Al-Hussaini Hazar Imam for blessings, guidance and empowerment for the fulfillment of our noble wishes. May our beloved Noor Mowlana Hazar Imam continually keep us on the Right Path. Ameen.

Traits of an Ismaili Dai